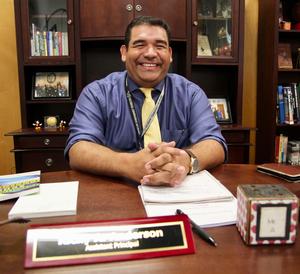 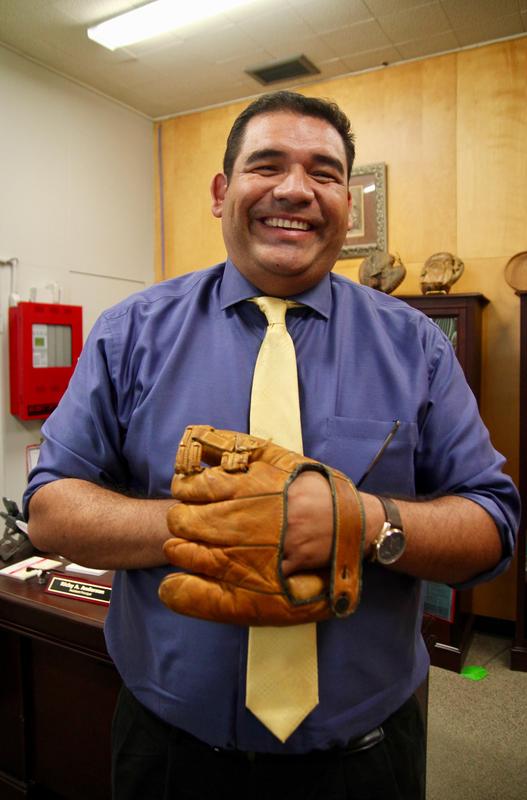 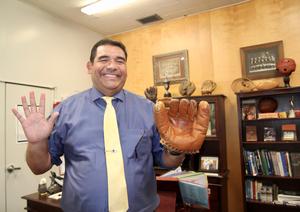 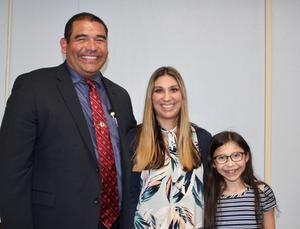 Former college pitcher will support day-to-day operations while Principal/Assist. Sup. Burt Umstead concentrates on new initiatives implementation.
By Peter Day
One look at new Lucerne Valley Elementary School Assistant Principal Ricky Anderson’s office and it’s easy to see that he’s a man who values history and keeps his eye on the target.
A former collegiate baseball pitcher who played at the University of Redlands, Anderson’s new school digs contain an impressive collection of baseball memorabilia — early 1900s baseball gloves and photos, in particular.
Baseball isn’t Anderson’s only passion. He loves pursuing education and passing along what’s he learned. After receiving his bachelor of arts degree, he earned his Masters of Education in Educational Administration at Concordia University. But Anderson’s not stopping there. He expects to earn his doctorate of education degree, also from Concordia’s Irvine campus, next year.
While Anderson’s personal education is impressive, it’s his achievements in the classroom that caught the eye of LVES Principal/Assistant Burt Umstead, Superintendent Peter Livingston and other district administrators.
“He has a strong background that aligns with many of our initiatives that is going to bring a lot to our Lucerne Valley Elementary School campus,” Livingston said. “We are excited to have Ricky on board.”
Anderson began his education career as an elementary school teacher in the Rialto Unified School District. In 2004, he joined the Redlands Unified School District where he served in different teaching capacities for 14 years. He has served as a school site council member, math intervention supervisor, run club coordinator and an instructional coach to teachers.
Last year, Anderson moved to the Coachella Valley Unified School District where he served as the Assistant Administrator of Academic Improvement at Las Palmitas Elementary School. There, he worked alongside the principal to assist with discipline and academic coaching, duties he will continue at LVES. Anderson’s presence will enable Umstead to concentrate more on bigger picture elements for the district.
“During the past year we have begun to bring alignment across our district with regard to all of our sites and initiatives,” Umstead said.  “Ricky will be supporting more of the day-to-day operation at the Elementary School as I continue to support the initiatives we have undertaken over the last few years.”
Specifically, the school district has supported AVID at the secondary sites along with Positive Behavior Intervention and Supports (PBIS) and Thinking Maps at the elementary school. The district also is in the process of aligning sites, initiatives, interventions, and enrichment’s across the district under the umbrella of  what’s known as Multi System of Support, or MTSS.
“This coming year we'll be working with County support in bringing alignment to all that is so wonderful within LVUSD,” according to Umstead.  “MTSS will bring about a system to align all that we are currently undertaking and measure their effectiveness.  At the same time, other supports may be integrated to fill in any gaps we may have to assure  continued success for our students.”
Anderson is excited to come aboard the LVUSD, where so many positive things are happening.
“This is the rise of something that’s going to be great,” he said of LVES and the entire school district.
Anderson regularly shares on Twitter — he has nearly 3,000 followers — and invites parents and fellow teachers to follow him @HeyMisterA. Besides tweeting about school and education, he shares outings with his wife, Sandra, and daughter, Alex, a 5th grader. The family lives in Highland.
Peter Day is a social media advisor for the Lucerne Valley Unified School District.
---------------
PHOTOS BY PETER DAY
#1 -- Mr. Anderson is all smiles at his new desk at Lucerne Valley Elementary School.
#2 and #3 -- The baseball fan shows a vintage baseball glove, one of several in his office.
#4 -- Mr. Anderson, his wife Sandra and his daughter Alex were introduced during the April school board meeting.