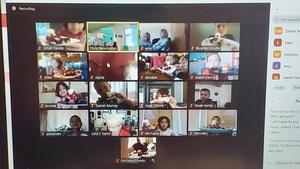 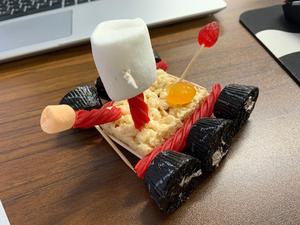 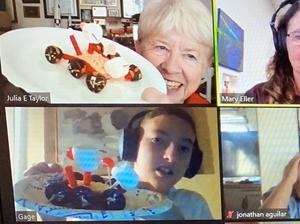 Educator Julie Taylor teaches about NASA’s Mars Rover mission to the Red planet that will land next February.
By Peter Day
Fourth- and fifth-graders in Lucerne Valley Elementary School’s Virtual Academy have traveled about as close to Mars as is earthly possible. With the help of Jet Propulsion Laboratory educational consultant Julie Taylor, Virtual Academy students recently learned about the Red planet, the Mars Rover “Perseverance” and the mission to Mars that began with its launch in July and will conclude when it lands next February.
“My students were so excited to learn more about the challenges of space exploration and solving problems that would lead to new inventions for the future,” says teacher Mrs. Mary Eller. Mrs. Eller and Mrs. Chris Pennington teach the Virtual Academy, which is designed for students whose families prefer them to stay at home during the COVID-19 pandemic. The Middle High School has a similar Virtual Academy.

Over the course of several Zoom classes, Mrs. Taylor taught students interesting aspects of the mission including how the Rover will drill for samples to later be retrieved by a future mission, how the Rover has a two-blade, four-pound helicopter onboard and how NASA scientists will remotely perform many experiments to lead to further understanding of the planet.
“Perseverance has many pieces of equipment that will gather data for a potential human landing,” Mrs. Eller says.
They also learned that the distance to Mars depends on many factors, the most important is at what point Mars and Earth are in their orbits around the Sun. The closest distance is a mere 40 million miles while the farthest distance is a whopping 249 million miles. “There are only a couple months every two years you can launch from Earth to get to Mars, Mrs. Taylor says. “If Mars was on the other side of the sun we wouldn’t have the fuel to get there.”
Students also learned that the United States has had a solid success rate for its missions compared to Russia’s. “We’ve had an 81 percent success rate. Russia has had only an 11 percent success rate. Space is not an easy thing to do.”

A longtime friend of Mrs. Eller’s, Mrs.Taylor is a NASA liaison in the educational field and a Solar System Ambassador who has overseen projects with Lucerne Valley students since 2009.
During the 2009-2010 school year, Lucerne Valley science students constructed a 7-foot-tall cube with artwork of a NASA astronaut who repaired the famous Hubble Space Telescope earlier that May. The LVES project was chosen and displayed at the San Bernardino County Museum and then selected from a wide range of student work to be on display at the Space Telescope Science Institute on the Johns Hopkins University campus in Baltimore, Md. Astronaut John Grunsfeld saw it and took a picture with the cube. The James Webb Telescope project prompted the creation of the large mural at the elementary school.
Before becoming a JPL educational consultant, Julie Taylor taught in the Adelanto School District for 37 years. She retired in 2007 but continued to be a 2nd/3rd grade math tutor for four Adelanto Schools, the NASA/science advisor for Columbia Middle School, a NASA Explorer School, and taught 6th grade at Morgan Kincaid.
Lucerne Valley Elementary is one of several schools she continues to help with NASA projects and provide students with science activities. She also consults for the Space Telescope Science Institute. She is the Adelanto School District’s first National Board Certified Teacher and has been given numerous awards. She continues to work to provide the youth of the world with inspirational avenues to learn science as a Solar System Ambassador Master Teacher.
Mrs. Taylor discovered that teaching with Zoom is much different than the traditional way, and both have their positives and negatives. “It’s a different world. The teachers that have to teach that way are amazing.” One of the challenges of using online video conferencing was demonstrating how large Mars is compared to Earth. “It was hard to get far enough away to show it.”
But there are pluses to using Zoom. “You can look at the entire class the whole time, and if someone is eating candy or something you can keep them in line better.” Another plus was that Mrs. Taylor could teach from her home office —and drink tea.
To conclude the recent Zoom lessons, Mrs. Taylor had the Lucerne Valley students each make a model of the Mars Rover with gummies, Reeses peanut butter cups and Rice Crispy treats. Needless to say, “they were very receptive,” and dismantling the rovers proved to be a tasty exercise for the budding scientists.
Following the class, Mrs. Eller had her students write thank you letters to Mrs. Taylor, which demonstrated how much they had learned. “One 5th grader shared about learning about the Red planet. Mars is a cold planet with weather conditions that could halt the rover’s mission,” Mrs. Eller said. “Another young man asked how someone would start a career with NASA, and another 4th grader shared his intrigue of landing previous rovers using balloons and parachutes to Perseverance’s landing using tethers.”

Today Mrs. Taylor, 74, lives on a 10-acre property in Baldy Mesa with her husband, a retired firefighter. The couple had 28 appaloosa horses and raised foals. But after her husband was injured after the stallion he was riding reared up, the couple sold most of the horses to a ranch in the Bishop area that helps disabled children through horseback riding. “We kept the five best mares and the stallion. The rest we had to let go.”
The Taylors also maintain a track of miniature 7-1/2 gauge trains, which guests ride during visits.
Mrs. Taylor first became interested in space exploration in 1957 as a 6th-grader when the first earth satellite, Sputnik, was launched. “I thought wow!” Soon after her father, who didn’t have a lot of money, bought her a small telescope. “That said to me that, yes, that even though I’m a girl I can be interested in science.”
Even though today she has a far superior 8-inch Meade telescope, she still treasures her first one her father gave her. “If I had I had to pick just one, I’d take the one my father gave me.”
Next February, Mrs. Taylor and the LVES Virtual Academy will hold a Zoom party to celebrate the scheduled touchdown of the Mars Rover on February 18th at 12:30 p.m.
Peter Day currently is a social media adviser for the Lucerne Valley Unified School District and a former editor of the Lucerne Valley Leader newspaper.
Click HERE to view more photos.