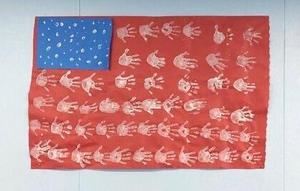 LVES Principal Ricky Anderson presents special, one-of-a-kind flag from the kindergartners.
Lucerne Valley Elementary School’s kindergartners and their teachers wanted to show their appreciation for the hard work and dedication of the school district’s Board of Trustees.
So all of the school’s kindergarten classes — the students of teachers Christine Fuller, Leigh Hannon, Melissa Banuelos-Almodovar, and Nicole McCarty — created a one-of-a-kind U.S. Flag. The red, white and blue flag features students’ hand prints for the stripes and thumb prints for the stars.
The special flag was presented by Principal Ricky Anderson during the school board’s February meeting and now is displayed proudly in the school board room at the district office. School board members were overjoyed to receive the special flag from the LVES students.

The flag has found its home on the wall of the Lucerne Valley USD's school board room.