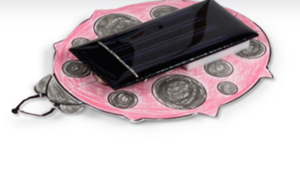 The Lucerne Valley Virtual Academy’s final in-person activity of the 2021-22 school year for elementary school-aged students was the creation of a Solar-Powered Bug. (May 16, 2022) Mrs. Eller instructs Virtual Academy students on how to create their Solar Bugs.
The Lucerne Valley Virtual Academy’s final in-person activity of the 2021-22 school year for elementary school-aged students was the creation of a Solar-Powered Bug. The STEM project, which was done on Wednesday, May 11th, served as an introductory to robotics and how to harness the power of the sun.
Each student utilized a small solar panel and a vibrating motor. Following the assembly, students added bug-like accoutrements such as eyes and antennae. Inside the classroom the bugs didn’t budge, but when they were taken outside the bugs virtually came alive, buzzed and moved under the power of sunlight.
Teachers Mrs. Eller and Miss Evans, who led the class, were joined by several parents who assisted in their child’s activity.  After completing their projects, students were treated to ice cream.
The Lucerne Valley Virtual Academy will hold its awards banquet at 5 p.m. on Wednesday, May 18th at the Sgt. Brian L. Walker Memorial Gymnasium at the Middle High School. The Academy’s last day of school will be on Friday, May 27th. Two virtual academy students take their Solar Bugs outside to watch them move. A Virtual Academy student lets her solar-powered bug get some sun. Mrs. Eller and a parent assist students during the last in-person activity of the school year.