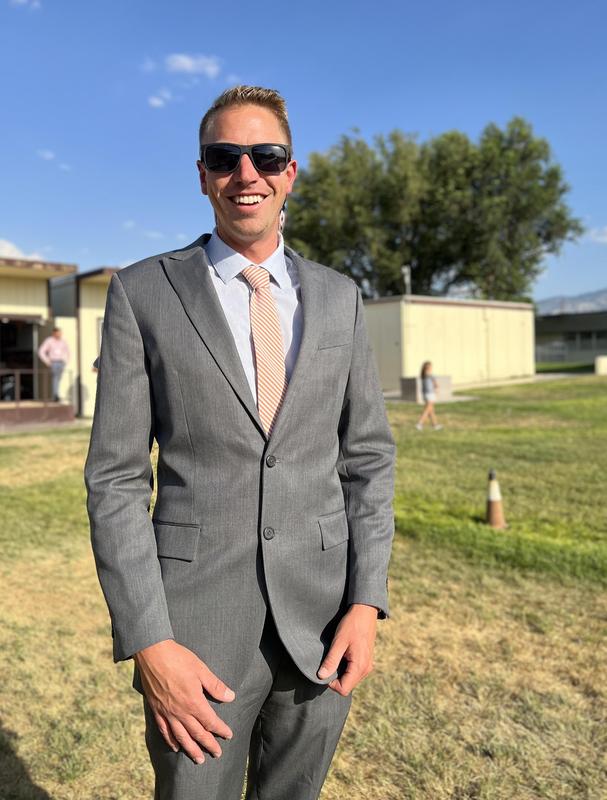 Mr. Jamie "J.P." Farrell explains the day's activities to students from Mr. Gaeta's 4th grade class.
Story and Photos by Peter Day
LVUSD Social Media
LUCERNE VALLEY — It used to be that elementary school physical education teachers led students in jumping jacks or presided over a game of kickball or four square. But times are changing, and Lucerne Valley Elementary School’s new P.E. teacher Mr. Jamie “J.P.” Farrell is overseeing an evolving program that emphasizes health concepts, a wide-variety of activities and sports, and mind-engaging sports strategies.
Mr. Farrell is the P.E. teacher to all ages at LVES — from transitional kindergarten (TK) through 6th grade. “I make it grade-level appropriate.” While the older students get snippets of athletic history or technique, he simplifies the activity for the younger ones. “I add in more fun. I tell them to act like eagles or zebras.” Students display a variety of styles while warming up for the P.E. class.
He also is tasked with preparing young student athletes for competitive middle school sports. In fact, 6th graders are now eligible to compete on Lucerne Valley Middle School teams.
“We have a bunch of student athletes,” he said. Not only have some got playing time, but some are excelling in their chosen sport. Some student athletes who currently or recently participated in Mr. Farrell’s LVES program are: Jovani Ceja-Gonzalez, Jacob Archilla, Valkyrie Simpson, Ayana and Victor Jaimez-Solorio, the latter siblings are among the best distance runners at the Middle High School. (New to Lucerne Valley schools, Victor previously established national age-group records). Runners display their speed in a 50-meter dash.
Recently, a LVUSD Social Media advisor visited Mr. Farrell as he supervised the P.E. at his once-a-week visit to Mr. Mr. Gaeta’s 4th-grade class. (Over the course any given week, he spends a 45-minutes session with all LVES classes). He syncs his activities to match the competitive sports going on at the Middle-High School and scholastic studies going on at the same time. With track and field season beginning soon, over the next few weeks he is coaching the students on the Olympics, tailoring his instruction to match students’ grade level when students are also studying ancient Greece in class. The track and field section will culminate in early February when the 6th graders will participate in their own Olympic competition. Mr. Farrell gets in the spirit and runs with the students.
During the class, he first explained a brief, simplified history of the Olympics. Instead of the 100-meter sprint, he had the 4th-graders run about 50 meters, but added a fun twist. “I decided to come up with a game for you guys,” he said. “You run as quick as you can to the end.
He made two groups: the chasers and the runners. Each runner attached a flag football flag around their waist and then after a count-off the runners were off. Some of the chasers were able to snag the flag of the runner in front of them. Then the participants traded roles.
“Mr. Farrell, I want to do one more!” a boy in cowboy boots exclaimed. “This is fun!” another student said in agreement.
Next up was the hurdles. Mr. Farrell put three flights of easily detachable ropes into cones in three separate lanes. For some of the taller students the race was fairly easy. Others had to work harder at getting over the ropes. Hurdlers clear ropes set up to release easily when they are hit.
Mr. Farrell grew up in Ventura and was a cross country runner who competed in the hurdles during the spring track season. He attended Sonoma State before working in the ski industry then moving to Big Bear with his wife Susanna, an oncology department nurse at Loma Linda University Health Center. He is completing his teaching credential in physical education, a K-12 credential, through Cal Poly Humboldt.
As a P.E. teacher, Mr. Farrell couldn’t be happier to land at Lucerne Valley Elementary School. “These kids are awesome. These teachers are awesome.”

BELOW ARE MORE PHOTOS OF MR. FARRELL'S P.E. CLASS