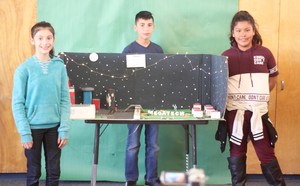 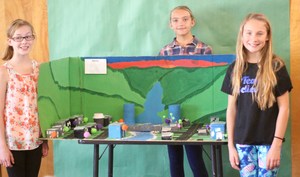 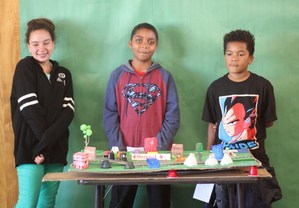 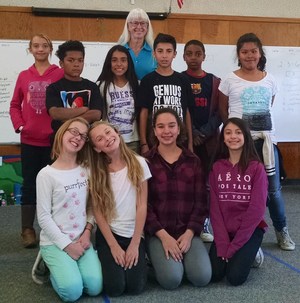 For Lucerne Valley USD's Future City club teams, the future is looking promising, thanks to brainstorming sessions where students collaborate hours on end.
By Peter Day
Social Media Advisor
Lucerne Valley Elementary School’s Future City students are working at making the world a better place.
Last month, three LVES teams presented their “future city” models at the regional competition at Grossmont College in San Diego. The Lucerne Valley sixth-graders went head-to-head with other Future City teams consisting of middle school students in grades 6, 7 and 8. Although they didn’t score high enough to advance to the finals competition in Washington, D.C. in late February, the students developed a passion for problem solving, working together and thinking toward the future — skills often used by engineers.
“I am just beyond proud of this group of kid,” said advisor Chris Pennington, a longtime LVES teacher. “They are dedicated, concerned, caring, involved, creative and passionate about doing well! What more can we ask of our students?”
Each team was tasked with with creating an age-friendly city 200 years in the future. They had to complete five “deliverables”: a scale model, project plan, virtual city design based on a Sim City they created and a 1,500-word essay. The final deliverable was a presentation to the Regional Competition judges.

Believers Ridge. Members are Kristy Klaus, Mya Butterick and Serenity Petroff.
According to the team’s project essay, “Believers Ridge will be a city of 8,500 people located in Dublin, Ireland. The city will have a view of the lush, green lands. There will be 200 stores and restaurants, and it will be mixed with senior citizens and younger people. It will have a high-quality heath care system with additional services such as outdoor yoga or water yoga. Seniors will have access to animal puzzles, and Believers Ridge will have an art center.
“We have learned that seniors, or just anyone, can do the activity they are passionate about,” according to the team’s essay.
Located by a river, Believers Ridge will have a fresh breeze and winds will never be more than 70 miles per hour. The community will have access to fresh water, a they will maintain four water towers. Emergency services will include three fire stations and two police station. The flat-level homes will have wide hallways for easy wheelchair access. Moving sidewalks will help people to get where they are going.
TechVille (also known as Megatech). Team members are Marisol Torres, Angel Cortez, Yanet Alcazar and Natalie Andrade.
Much larger than Believers Ridge, Techville will be a city of about 700,000 people, located in Malaysia. The houses will be technologically advanced and include a diverse and effective transportation system with Maglev (magnetic levitation) trains and buses, and planes, boats and subways.
There will be five high schools and three colleges and universities. The schools will use the most modern technology including holograms and voice-activated devices.There will be robot helpers and free and easy cloud access. Residents will have electric cars that can be charged while driving.
Housing will be “all teched-out,” but that could present drawbacks for older residents. “One of the problems of our housing is that full technology might be difficult because our elders won’t know how to control it.”
But the designers have those residents in mind. “We want our elders to feel comfortable in our city…. We want all of our citizens of all ages to feel welcome in our city.”
Humans won’t be the only intelligent ones in Techville.
“We are going to install humanoid robots with artificial intelligence to help elder citizens step-by-step with everything installed in the house and to assist them in living in general.” This team doesn't want seniors too lonely or to be embarrassed when they need help so each senior is provided with a robot 'friend'.
Future Architects. Members of this team are Justice Rodriguez, Derrick Tyler, LaDon Crow and Lilli Saba.
A remarkable age-friendly place, Future Architects will be a city of 50,000 located near the Maldives group of islands in the Indian Ocean. By placing the city in water, flooding caused by global warming will be dealt with. The young designers also came up with a solution to an indelicate topic: solid waste. “What we do with our waste is we take it and feed it to bacteria. We will do this every year.” Toilets will have air vacuums that such the waste into cylinders containing the bacteria.
The elderly will have “independent wheeled chairs” that have global positioning service (GPS) and electric power, capable of powering them up to 35 miles per hour. When the batteries run down, it will only take 5 to 15 minutes to charge at one of many electrical plugins around the city.
Residents and visitors will receive free hearing aids and tickets for a “bus yacht.” The seniors will stay active with the help of in-house trainers and parks with fresh air.
“Some benefits we have for our citizens are parks, shops, stores, restaurants, schools, colleges, job opportunities, hotels, houses and jails.”
Ms. Pennington credits the school’s Future City participants for the utmost dedication.
“These guys are so fantastic,” she said. “Starting in September they come in the classroom every single Wednesday and stay until 4:30 p.m.  every other Wednesday."