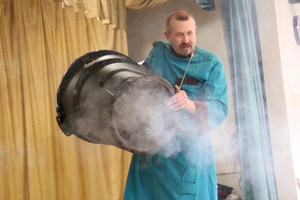 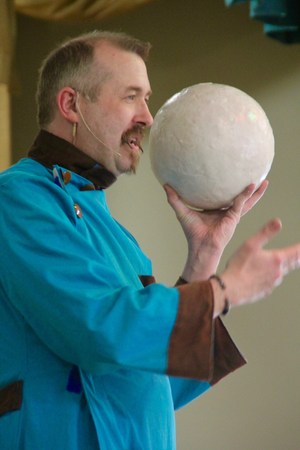 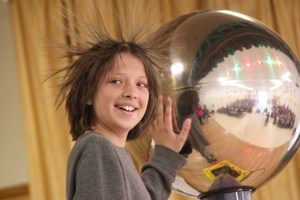 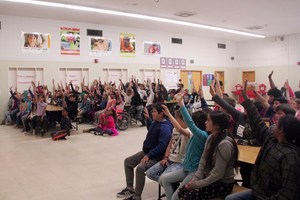 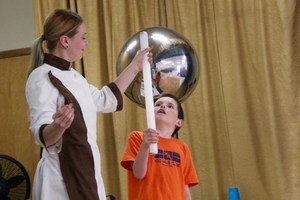 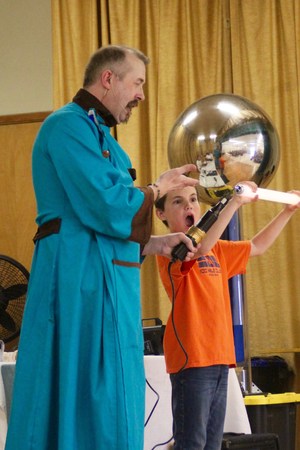 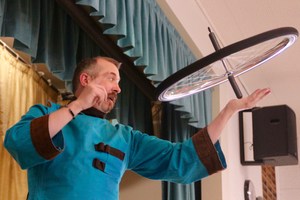 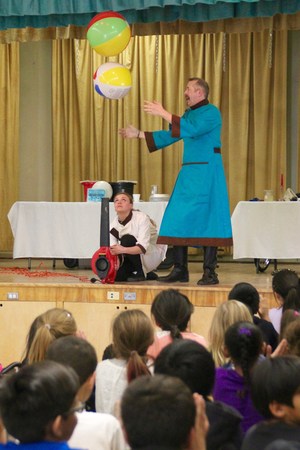 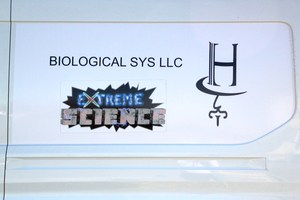 Hagerman the Magician shows what looks like magic is actually science, and science can be very entertaining, indeed.
For nearly an hour, Lucerne Valley Elementary School students were shot at with playful puffs of fog, dazzled by a seemingly gravity-defying bicycle wheel, and wowed by colorful balancing beach balls. This literally hair-raising event — courtesy of Hagerman the Magician his assistant — was more than just entertainment, it was an “Extreme Science School Assembly” that proved science is fascinating, curious and fun.
Dressed in a Back to the Future-esque lab coat, the comedic David Hagerman drew in the eager Eagles by blending whimsy and fact. Perhaps alluding to Harry Potter, he explained that wizards actually use science to accomplish seemingly magical acts.
“Magic is not magic. It’s science,” he said. “Wizards use science to perform their wizardry.”
Gingerly mentioned in Hagerman’s presentation were warnings of the importance of using safety precautions such as safety goggles or having a fire extinguisher nearby. The Branson, Mo.-based science educator also demonstrated through comedy the need for following directions exactly. He asked one student volunteer to stand still while he put a hat filled with water on her head. But he had to take the directions out from under the hat because he forgot one step. Magically — remember, it’s all science — when the hat was taken off the girl’s head, not only was her hair not wet, but there was no sign of the water. It turns out, he explained, he had placed a polymer powder in the water, much like one used in baby diapers, which literally sucked up all of the water.
Magic? No, science!
Two Extreme Science School Assembly events were presented on February 26. Grades 4-6 were the first followed by bedazzled K-3 students in Goulding Hall.
To learn more about the Extreme Science presentations and related services by Hagerman the Magician, visit http://hagermania.com/