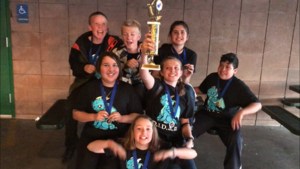 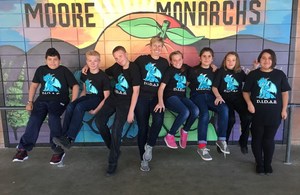 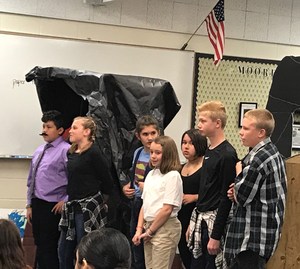 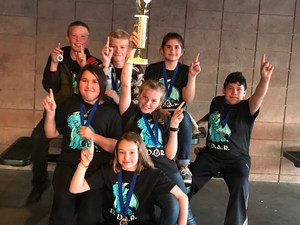 D.I.D.A.R. Destination Imagination team wins trophy at regional competition
One of Lucerne Valley Elementary School’s Destination Imagination teams is heading to the 2018 California State Tournament. The state tournament will take place on April 7 in the Fresno County city of Clovis. Destination Imagination Dragon Adventurers Reunited (D.I.D.A.R.) — the team is known as an abbreviated version of its acronym, “Did R” — earned the opportunity to move on to the state contest after winning a first-place trophy at the recent regional-level competition in Redlands.
D.I.D.A.R. and three other Lucerne Valley teams were among 58 competing in six different categories at three levels — elementary, middle and senior. Participating schools came from all over the region and including the schools from Pasadena, South Pasadena, Arcadia, Tehachapi, Redlands, Long Beach, Yucaipa, Alhambra, Toluca Lake and Ontario.
It was a crazy fun day at Moore Middle school in Redlands. It was a little on the chilly side but competitors found the sun. Participants started the day by checking in and getting puzzle pieces and a scavenger hunt to participate in and to encourage the kids to get to know member form other teams. D.I.D.A.R. members organized several games of tag and other made up field games in the afternoon for everyone who wanted to play.
The local team is made up of six LVES 6th graders and one 5th grader. This year they had to compete at the middle-school, which is 6th-8th grade. D.I.D.A.R. team members are Kevin Angeles, Emilia Daniels, Chloe Evans, Evan Herriman, Kylee Lambert, Madison Miller and Wyatt Perry. The team competed in the Science challenge titled “Unlikely Attraction.” The challenge consisted of creating a three-part amusement park attraction in an unlikely location. They had to use three different scientific concepts to create the attraction.
“I don’t have the words to describe how proud I am of this team of amazing young people,” said team advisor Victoria Kessler-Perry. “They blow me away every day I work with them. As a mom of one of the members and as their team manager for the past 4 years I have had the opportunity to watch them grow and come together to solve the challenges of DI and growing up.”
According to Ms. Kessler-Perry, the parents and other family members of the team are very active in DI, helping other LVES teams as well. Those helpers deserving special credit include Kylee’s Joe and Lee Ann Lambert and Emilia’s mother Feliza Daniels who serve as appraiser. Madison’s mother Joie Miller is a team manager for one of the younger teams, and Madison’s older brother and sister, Dylan and Katelyn Miller, are volunteers. LVES staff member Fran Muller also served as a team appraiser.
Ms. Kessler-Perry knows competition will be especially tough at state, but the D.I.D.A.R. has proven its up to the task. If the Did R team scores high enough at state it will go on to the Global Finals in Knoxville, Tennessee in late May. More than 1,400 top-scoring DI teams from 45 U.S. states and 14 countries will be there.
“This team never gives up. They started working on ways to make their solution better the moment they walked out the door after their performance Saturday. I can’t wait to see what they do in April.”