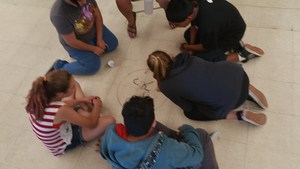 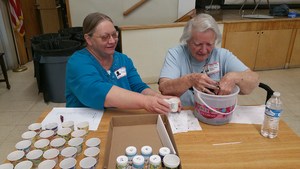 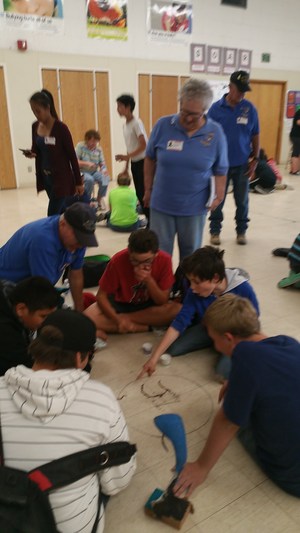 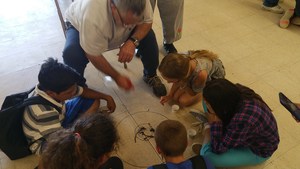 Proceeds from the event benefit the Lucerne Valley Road Runners’ annual Tailgate Trunk-or-Treat event on Halloween.
Worms to your marks, ready, go!
While the annual Kentucky Derby (this year on May 5) attracted the nation’s best horse jockeys to Churchill Downs in Louisville, the country’s best — and certainly the only — worm jockeys led their slithery steeds in the 18th annual running of the Great American Worm Race at Lucerne Valley Elementary School on May 4.
While it was fun for the handlers and contest volunteer supervisors, courtesy of the Lucerne Valley Road Runners, the underlying cause was especially meaningful. The Lucerne Valley residents and businesses — 114 in all — contributed $10 apiece to sponsor a worm. The $1,140 raised will get the Road Runners nearly halfway to their annual goal of $2,500 toward candy for the annual Tailgate Trick-or-Treat event this coming Halloween, according to event founder Jo Richards.
The multi-round event was held in Goulding Hall, which serves as the school’s cafeteria and multipurpose room. The worm race also provides an opportunity for one of the town’s greatest wits to share light-hearted, whimsical thoughts on the event.
“We don’t allow centipedes because Nike will not allow them to have more than one pair of shoes,” Richards said, adding that Bill Lembright of the Lucerne Valley Market is in charge of the worm training center. “It’s always fun. The kids have fun. The adults have fun and we appreciate the sponsorship.”
The five winners — all 6th graders — each won $20 for the efforts, she said.
CLICK HERE for a related video.