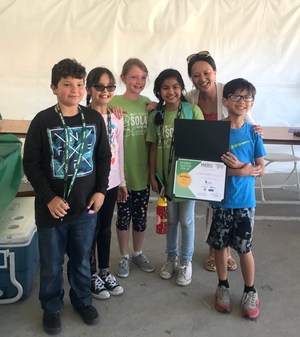 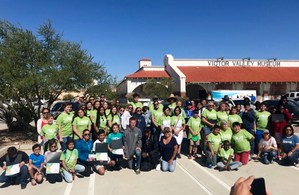 ‘The Crazy Cookers’ take first place in recipes, second place in design at annual Mojave Environmental Educational Consortium event.
Lucerne Valley Elementary School’s “Crazy Cookers” came to heat things up and cook they sure did.
The five-member team not only took first place in the recipe category, but the team also came away with the second place prize in solar oven design at Sixth Annual Solar Oven Cook-off event on Saturday, May 12. The event was sponsored by the Mojave Environmental Educational Consortium at the Victor Valley Museum in Apple Valley. The team earned $350 for their efforts.
The team, which consists of students in grades four through six, consisted of Brian Cortez, Alexah De Lira, Arelyn Gonzalez, Gavin Hirschhorn and Jadyn Paddack. The Crazy Cookers made carne asada, tortilla chips, pico de gallo, guacamole, churros, and a whipped cream dip. “The team had awesome teamwork and completion of the tasks!” said coach Ms. Liu Hirschhorn, fifth grade teacher at Lucerne Valley Elementary.
According to the MEEC, the solar oven competition was developed to provide a real world solar thermal challenge for upper elementary and middle school students. Each five student team is responsible for designing and building a fully operational solar cooking device and then cooking a dish of their choice with their device. The challenge is to design an effective solar cooker and to pair the operational capability of the cooker to the type of food cooked.
The teams’ solar cooker must be portable and not weigh more than 15 pounds; however, there is no size limitation. The oven also must be capable of reach a minimum temperature of 212 degrees and a maximum of 400 degrees fahrenheit. Ovens are judged on design, construction technique, function, creativity, durability, and construction form. The recipes are judged on quality, difficulty, nutrition and creativity, and presentation and plating.
To learn more, visit http://meeconline.com/solar-oven-cook-off/