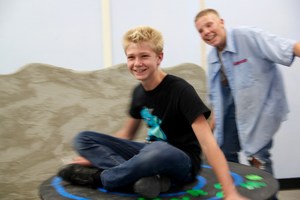 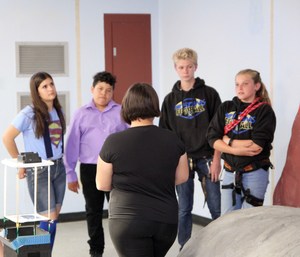 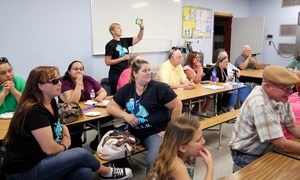 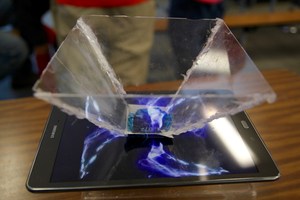 Award-winning Destination Imagination team shows Lucerne Valley Roadrunners and other guests how their project operates.
In April, Lucerne Valley Elementary School’s Destination Imagination Dragons Reunited team (DIDAR for short) won the coveted Renaissance Award after earlier winning the regional competition in Redlands. On Wednesday, May 23 the seven team members demonstrated their award-winning performance project in front of members of the Lucerne Valley Roadrunners, Butcher's Block, Chamber and other guests.
The DIDAR team consists of LVES students Kevin Angeles, Emilia Daniels, Chloe Evans, Evan Herriman, Kylee Lambert, Madison Miller and Wyatt Perry. Lucerne Valley teacher Vicki Kessler is the DIDAR team manager. Ms. Kessler, who has served as a DI adviser for the last four years, began the demonstration by introducing DIDAR team members and providing background on Destination Imagination and its goals.
“People are always asking, ‘What is this thing?’ What are the kids doing?” she said.
The first LVES DI team four years ago had “giant” ideas, but they had difficulty taking their ideas into reality. But Ms. Kessler’s teams have gradually learned how to make their creative ideas work.
“This year their ideas got even bigger,” she said, “but they stepped up and figured out how to do it.” They asked, “How are we going to build it?” They also found a certain contemporary source to obtain technical information for their project — YouTube.
For this year’s challenge all DI teams had to create a Science, Technology, Engineering and Math (STEM) challenge titled “Unlikely Attraction,” such as an attraction at an amusement park. Three scientific properties had to be incorporated in the project. After much thought, team DIDAR decided to create a volcano ride.
The DIDAR project centerpiece is an object that looks like a merry-go-round that spins with light and sound. The ride is powered by the motor of an electric drill. Music is broadcast from a cellphone on speakers amplified by plastic cups, and 3D imaging is created by a student-made PepperGram, which creates a hologram effect. (“Star Wars” director George Lucas used a PepperGram during a scene with Princess Leia. Team members also painted the “lava tube” set.
“Then they had to pull this stuff together and come up with a story,” Ms. Kessler said.
During the demonstration On Wednesday, a team member road the ride. Afterward, others got a chance to enjoy it. One rider was former school board member Jean Morgan, a longtime community member who participates in LV Roadrunners activities. (Roadrunner Jo Richards passed on taking a spin but led a small group in “Itsy, Bitsy Spider” during an Instant Challenge).
The DI team began preparing their project last fall and began competition early this year. During the regional competition in Redlands and the state event in Clovis all DI teams had to assemble and perform their projects in around seven minutes. Each member also has to recite memorized lines during competition.
Ms. Kessler thanked those who have made the difference. “I couldn’t manage this team without this set of parents.”
Additional photos of the demonstration are located on the District's Facebook page. Click HERE to view them.