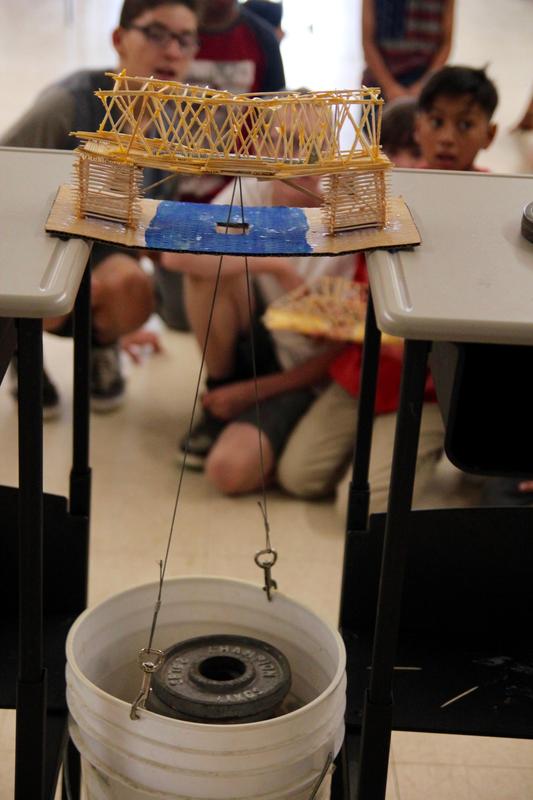 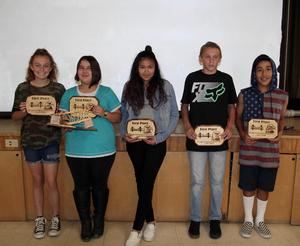 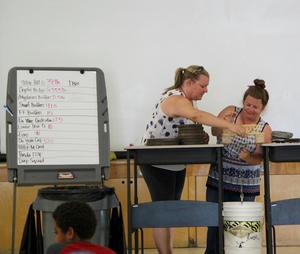 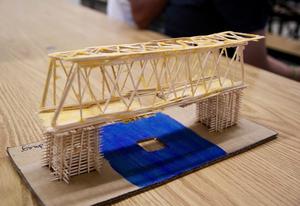 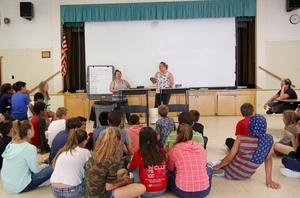 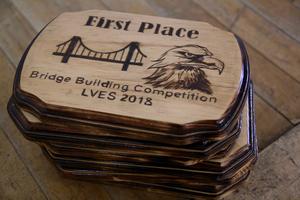 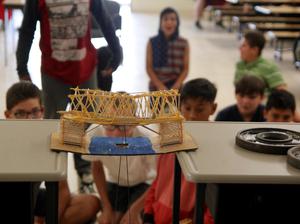 Annual toothpick bridge building event teaches an assortment of STEM-related skills and knowledge to sixth-graders.
The five-member HDDFM Construction Co. team won the annual bridge building competition at Lucerne Valley Elementary School on Thursday, May 31 with its toothpick creation holding 77-1/2 pounds. The IBBC team’s entry tied HDDFM’s but came in second due to its higher hypothetical construction cost, $1,466,000 to $1,273,000.
The winning HDDFM team members are Kayden Davis, Emilia Daniels, Miyah Morgan, Eein Hite and Raul Ferrer Contreras.
The annual competition, which was held in the school’s cafeteria/multipurpose room, serves as a Science, Technology, Engineering and Math (STEM) lesson for sixth-graders. But there’s more. Students learn to budget, build and design.
Each team begins with a hypothetical construction budget of $1.5 million. To start, teams “purchase” a bundle of toothpicks and bottle of wood glue for $550,000. Each team member has a job. There is a project director who writes notes and transactions, an architect who draws the design to scale, an accountant who keeps track of purchases, writes checks and keeps a balance, a transportation chief who is the sole member to pickup materials from the warehouse and a carpenter who oversees the building of the project. Lucerne Valley’s bridge building competition is conducted by teachers Mrs. Paddack and Mrs. Lane.
This year’s competition began with the team that kept their budget the lowest and ended with the highest budget team. Tootsie Roll Co., which spent $992,000, was first up. The team’s bridge held for 38 pounds but collapsed when the next weights were loaded into the bucket attached to the bridge. The Crystal Bridge Co. team, with $1,000,072 in construction costs, held 35 pounds. The Mysterious Builders had a construction budget of $1,000,083 and held 22-1/2 pounds. Excitement began to build in Goulding Hall when the bridge constructed by the Smart Builders, who built their project for $1,092,500, held 47-1/2 pounds. The FF Builders with $1,102,000 construction costs, held 15 pounds. Da Wae Construction’s bridge held 12.5 pounds on $1,106,000 of construction costs. Lumber Drive Co. held 10 pounds on $1,108,000.
Next up were the Lions team with $1,165,000 in construction costs. The team’s toothpick bridge held 40 pounds. Oh Yeah Corps. with $1,242,000 in costs took the lead with 52-1/2 pounds held. Following Oh Yeah Corps. was the HDDFM Construction team with construction costs of $1,273,000 taking the lead with 77-1/2 pounds.
But the competition was far from over. The Panda team’s project held 12-1/2 pounds with $1,302,000 construction. The DERP Squad’s toothpick creation held 45-1/2 pounds with $1,434,000 in costs. Then the final team, IBBC, came up. Their project, which cost $1,466,000 to build, also held 77-1/2 pounds. But the HDDFM Construction team was awarded first place plaques, which were crafted by student Irish Bever’s father, because their construction costs were less than IBBC’s.
PHOTO OF WINNING TEAM: From left to right: Kayden Davis, Emilia Daniels, Miyah Morgan, Eein Hite, Raul Ferrer Contreras