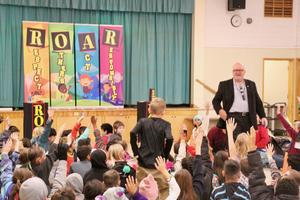 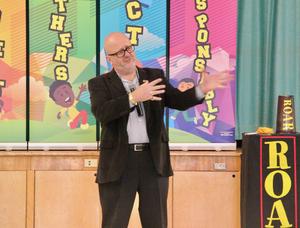 “The Respect Guy” Al Ulman teaches students to respect others and act responsibly during two assemblies.
Speaker, magician and storyteller Al Ulman, “the respect guy,” shared illustrative stories while wowing Lucerne Valley Elementary School students and teachers with magic tricks during two school assemblies on Monday, January 14.
“I know you Eagles soar,” said Ulman, who flew in from his home in Maui, Hawaii for the event, “and this afternoon we’ll teach you to roar!”
During each presentation — the first was for younger students, the second event was for older students — Ulman stressed the importance to Respect Others Act Responsibly, or R.O.A.R. He started with a story about how as a young child he broke a window. To teach the young Al to be responsible, his parents made him pay if off by requesting he perform additional chores.
Between his lessons during the show, Ulman performed magic tricks. In one, he asked for student volunteers and one teacher to come up front and take ropes, each different in length. After surprising students with the ropes all becoming the same length, he shared truisms:
“The way to get respect is to respect others.”
Ulman also addressed bullying. To avoid a bully, he said, use “WITS”: Walk away, Ignore them, Tell someone, Stand up for yourself. He explained the difference between tattle-telling and reporting. When someone is hurting another person, or yourself, reporting the situation is important. “Tell a teacher, a parent or someone else.”
The speaker also suggested that students not get caught up in envying others whose families may have more money than theirs. “You never have to be rich to be clean. You just need soap and water. Respect yourself. You have to be happy with who you are.”
Other R.O.A.R. lessons:
• Include people in what you do, be friendly.
• Be kind.
• Respect the environment. Don’t pollute.
• Talk less, listen more.
• Every time you do something nice you could be changing someone’s life.
• Think about what you say or do before you do it.
• Don’t hurt other people’s feelings.
• Treat people the way you want to be treated.
• When you make a mistake, apologize.
Ulman concluded his presentation by thanking the Lucerne Valley students for their polite, respectful behavior. “You are a bunch of good students,” he said.
PHOTO:
Al Ulman, the “Respect Guy,” presented two assemblies on Monday, January 14 at Lucerne Valley Elementary School. Through the use of magic tricks — and good, old-fashioned fun — Ulman demonstrated why it is important to Respect Others Act Responsibly, or R.O.A.R. The educational, enrichment assemblies also helped to affirm the LVES Eagles’ school motto to S.O.A.R.: “S” Safety, “O” On Task, On Time, “A” Act Responsibly, “R” Respect Self and Others. Photo by Peter Day